Shakespyeare: Day 211 - Shakespeare and the Starlings 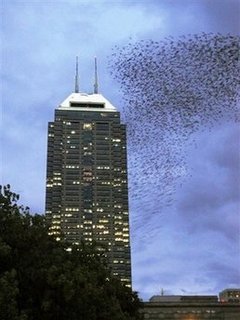 In the summers of 1890 and 1891, Eugene Schieffelin released 100 starlings in Central Park. This was part of his goal to introduce to America every bird mentioned in Shakespeare's canon. He imported and released nightingales, skylarks, bullfinches, and starlings. All of these failed to thrive and died out, all except the starlings which established themselves in New York City then spread out. Today, they span the continent with a population of 200 million, all descendents of the Shakespearean hundred. And all because of a little line in Henry IV:

I'll have a starling shall be taught to speak
Nothing but 'Mortimer,' and give it him
To keep his anger still in motion.