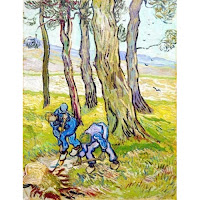 Beth Bates, prose editor for Booth Journal, sent a tweet in my direction asking for a list of "impressive feats of translation." A feat, to me, means a messy sort of translation or version, a hybrid, a borrowing which creates a new work distinct for the original. Here the face of the original author blends with that of the translator. Beth's timing is fortuitous. As I kicked around ideas for my list, I found fodder for my upcoming talk at the University of Michigan. So, in no particular order, feats of which I am fond: