I read Two Gentlemen of Verona and The Winter's Tale in the past weeks. The two plays are representative of the extreme chronological ends of Shakespeare's career. Animals make memorable appearances in both, a dog in the former, a bear in the latter. 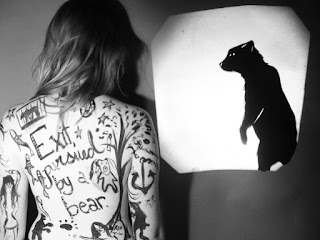 In TGV, the servant Launce's dog, Crab, runs amok, eating food and soiling rugs. Hapless Launce, takes blame for all these things, even urinating indoors, to save his beloved pet and is pilloried.

The best stage direction I've ever read occurs in TWT - exit, pursued by a bear. Spoiler: the bear mauls the guy, just deserts for dumping a baby on the desert shores of Bohemia (neither desert nor coast exist there).

Proteus giving a mangy mutt as a token of love to Silva is a nice comic touch. The editor for the Oxford Complete Shakespeare points out that after TGV Shakespeare didn't repeat the experiment of giving a large role to an animal, perhaps because of their unpredictability. So, though there is some speculation that the Globe may have used a real bear from the bear-baiting pits for TWT, I have my doubts. I do like the idea of a Russian bear rampaging across Shakespeare's stage.
- January 16, 2013