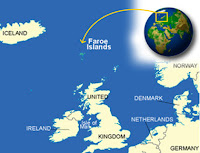 I leave tomorrow for the Faroe Islands for a 3 1/2 week study of the Faroese language. I have a bad habit of picturing what a place will be like before I've seen it (outside of google images). Sheep that outnumber people three to one, sodden hills, grass roofs, sudden fogs, cake and raisin stuffed puffin dishes, and controversial whale hunting make not imagining the Faroes difficult. But being there will be beyond imagination.

I remember stepping off the plane in Pucallpa, Peru. No amount of reading prepared me for the enveloping wall of heat (sort of pleasant) and the smoke tang in the air. Being there is something that travelogues can't give you. So when I step off the final plane after a solid day of flight into the 50 degree evening, I'll see what the Faroes are like.

As I finalize my packing, lines from two very different poems run through my head. The first is from the Hobbit. When I think of it, I hear the singer on the warbling 45' record of the book I listened to growing up. Hobbit doggerel I know, one of the many songs I skipped when rereading Tolkien as an adult, but sometimes things are trite and true:
"The greatest adventure is what lies ahead.
Today and tomorrow are yet to be said.
The chances, the changes are all yours to make.
The mold of your life is in your hands to break."
Tennyson is out of fashion. Our culture is suspicious of motivational/inspirational themes in serious art. Dead Poets Society also did this poem in. But I've loved it since reading it as a junior in high school and I think of it now:
“Push off, and sitting well in order smite
The sounding furrows; for my purpose holds
To sail beyond the sunset, and the baths
Of all the western stars, until I die.
It may be that the gulfs will wash us down;
It may be we shall touch the Happy Isles,
And see the great Achilles, whom we knew.”
Hopefully neither Air Canada or Atlantic Air will be smiting the sounding furrows. But adventure is the unfolding, actual happenings rather than the overview of a place. Internet will be patchy in Torshavn but I will try to update this periodically.
Cheers, dear reader. Onward and outward.
M
- July 31, 2011 No comments:

I'm pleased to announce that the winner of the 2011 Tea and History Translation Contest is classical enthusiast and literary blogger William Braun. Selected from many distinguished entries, Braun's piece best captures the pithy tone of Martial as well as his keen eye for social and literary fraud. Here is his translation:
AFTER MARTIAL X.CII
“Him? A father? How’d he do it?
Never even fucked a—”
“Screw it.
Ask Gaditanus. He should know it.
He writes jack but still’s a poet.”
- July 28, 2011 No comments:

One day to go on the First Annual Tea and History Translation Contest. The contest ends at 11:59pm, Wednesday the 27th. I've received some great entries from diverse translators including a dentist, a public health student, and an expat teacher.

Some people have expressed interest but have been confused on how to translate Martial without knowing Latin. Lots of authors - Ted Hughes, Seamus Heaney, and David Ferry - do this. They look at literal prose translations and make their own poetic version (in this contest's case, a rhyming poetic version).

A great resource is http://martialis.blogspot.com, a blog with literal prose translations. Google books has some good resources such as this one. Also, www.poetryintranslation.com has a selected epigrams here.
- July 26, 2011 No comments:

I received the first entry for my contest this morning. The submission comes from a public health graduate student at U of M. A first time translator, she sets a high bar for competition with ascetic compression and clever rhymes, one of which pair 'smugly' with 'fugly.' Send in your entries. Contest ends next Wednesday. See previous post for full details.
- July 19, 2011 No comments:

In Defense of my Desk

When Brett Jenkins-Braun asked me to photograph my desk for her blog, I quickly snapped and emailed off a few photos. Looking back, I am surprised that I didn't let my propensity to dress up and edit reality take over. I didn't clear off the detritus of textbooks and thesis cardstock. I didn't put my papers at right angles. I didn't give pride of place to my compact OED, which Will Jenkins-Braun nonetheless spotted.

Recently, my desk has become a cluttered storage space for everything I should get to - writing poetry, writing lessons, translating, and typing correspondence. Since the loss of my daughter, I've done very little writing. I've found myself letting letters go unanswered. I went two weeks without checking my voicemail. Cluttered and disorganized, stacked and backlogged - a desk is a good reflection of the inner state of a writer, at least in my case. Perhaps non-writers' inner states show elsewhere.

This desk has been passed around my family. I think it was my sister's originally, probably picked at a garage sale. I commandeered it in middle school. The initials of one of my first girlfriends are faintly carved into the front. Pictures and explanatory notes below:

Today, I took my first stab at translating Martial, a Roman poet who specialized in snarky epigrams, a sort of a 2nd century Daniel Tosh. His poems are short and much easier to translate than other classical authors. I thought it would be interesting to see people's take on his work so I thought I'd propose a contest. Pick an epigram, translate it into rhyming, metrical English. No knowledge of Latin is necessary. Feel free to bring the piece into a modern paradigm. Send entries to MatthewLandrum(at)sbcglobal(dot)net. The winner gets a package of Tazo tea, Livy's "History of Rome," and a two dollar bill.  The winning epigram will be published on my blog. 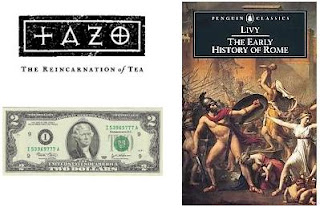 So, I'm halfway through my second year of reading a book a week (average). I’ve found that, at its worst, this exercise devolves into reading to meet a deadline or check a box. The beginning of this year was like that. I was reading books I wasn’t into so I could sell them and clear some shelf space. But reading should be a love affair not a chore. I abandoned this approach, sold books I wasn’t interested in, and launched myself into the wild black and white yonder.
This year, I've found new favorites and encountered new approaches to old interests. One of the year’s best finds has been The Greek Anthology, a collection of ancient/medieval epitaphs and pithy verse. A quick look through the list below will show that I’ve been on a Paul Muldoon kick. Most recently I read Ted Hughes: Selected Translations, interesting as Hughes’ approach to translation is opposite my own.
Some of the highlights of this year’s list:
(In Hades, Adonis makes this answer to the question what was the most beautiful thing you left behind?): Finest of all the things I have left is the light of the sun, / Next to that the brilliant stars and the face of the moon, / Cucumbers in their season, too, and apples and pears.
- Praxilla (trans. Bernard Knox)
Should you thirst for water, we will wring you a cloud/ And should you hunger for bread, we will slaughter a nightingale.
- Nikos Gatsos
Now I think it’s only right / to have got beneath her skin / where I’m waiting for some lover / to kick me out of bed / for having acted on a whim / when she herself has taken it into her head / all those who’ve gone undercover / may as well sink of swim.
- Paul Muldoon
Even her momentary taking shelter / and finding some ease from the helter-skelter / offered the prom queen a glimpse of what it is to succeed / yet the sudden failure of a brake drum / extended her lease on Elysium.
- Paul Muldoon
The list thus far:
1. Anthem - Ayn
2. Roman Elegies - Johann Wolfgang Goethe
3. Late Wife - Claudia Emerson
4. Approximately - Don Schofield
5. Inventing - Edmund Keeley
6. Spar - Karen Volkman
7. The Greek Anthology - Ed. Peter Jay
8. The Aeneid - Publius Vergilius Maro, trans. Robert Fitzgerald
9. Love in the Time of Cholera - Gabriel Garcia Marquez
10. A History of , Queen of the Sea - Thomas Madden
11. Maggot - Paul Muldoon
12. The Cloak - Nuala Ni Dhomhnaill, trans. Paul Muldoon
13. A Lad - A. E. Housman
14. Psalms - ESV
15. Poems - George Seferis, trans. Rex Warner
16. A Distant Mirror - Barbara Tuchman
17. Imperfect Birds – Ann Lamott
18. The New Covenant – trans. Willis Barnstone
19. Moy Sand and Gravel – Paul Muldoon
20. Unfinished Poems – Constantine Cavafy
21. Human Chain – Seamus Heaney
22. Sailing the – Thomas Cahill
23. Old School – Tobias Woolf
24. Book of My Nights – Li-Young Lee
25. The Pharaoh’s Daughter - Nuala Ni Dhomhnaill
26. Greek Lyrics – Lattimore
27. Ad Infinitum: a Biography of Latin - Nicholas Ostler
28. Selected Translations – Ted Hughes
- July 07, 2011 No comments: